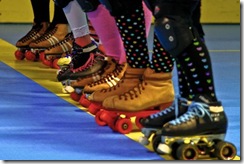 It’s taken me a while to write up my thoughts about Going in Circles, the latest novel by Pamela Ribon. This is partly because my blog is kind of becoming all-Pamie-all-the-time and I thought maybe you/she deserved a break, but it’s mainly because it took me some time to decide exactly what I wanted to say about the story. If you don’t want to read this whole post, know this: I LOVED Going in Circles. I LOVED IT SO MUCH.

Here are some of the reasons why:

And here’s where I have to very reluctantly admit something: I’m afraid this book fits in the category of “chick lit,” and that means that maybe I like chick lit after all. Dammit. (In my defense, I’ve always thought of chick lit as being poorly written—like one step above Danielle Steel and Jackie Collins on the intelligence ladder. It’s possible I’ve been wrong about that all along, because it’s certainly not the case here.)

Besides the roller derby thing being completely foreign to me, I’ve honestly never thought of a divorce between a childless couple to be such a big deal—more like a “mulligan.” There are no kids to be affected, so it’s pretty much just dividing up property and that’s no biggie, right? Sooo wrong. I appreciated how both Charlotte and Matthew dreaded the idea of ending their marriage. It made perfect sense that they would put off making a decision (thanks to the author’s creative ways of sharing Charlotte’s thoughts), and I found myself going back and forth between rooting for them to last and feeling that it was time for them to end it. In that way, this story opened my eyes to an aspect of divorce I’ve not dealt with personally. This was far from a self-help book, but I can easily see how it would be hugely comforting to someone who has gone through a similar experience. I don’t see that very often in novels, but I like it when I do.

The last few chapters of Going in Circles were powerful and humorous and sad and uplifting all at the same time; they showed Charlotte challenging herself in roller derby, coming to terms with what had happened in her marriage, and making decisions that would change her life. As much as I enjoyed the entire story, I especially loved the last third.

It’s a very nice thing to enjoy a book that much, to smile even as I finish the last page. I thought Going in Circles was one of the best ones I’ve read in a long time. And meeting Pamie in person soon after? It was like Neosporin on those roller derby injuries. 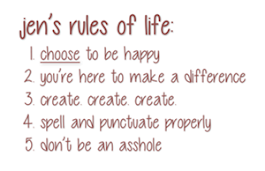 You seem bitter. Did someone piss in your Cheerios? I’m not bitter. I think unicorns-and-rainbows stuff isn’t very interesting to read, so I tend not to write that way. But also, now you’re being kind of a jackhole.